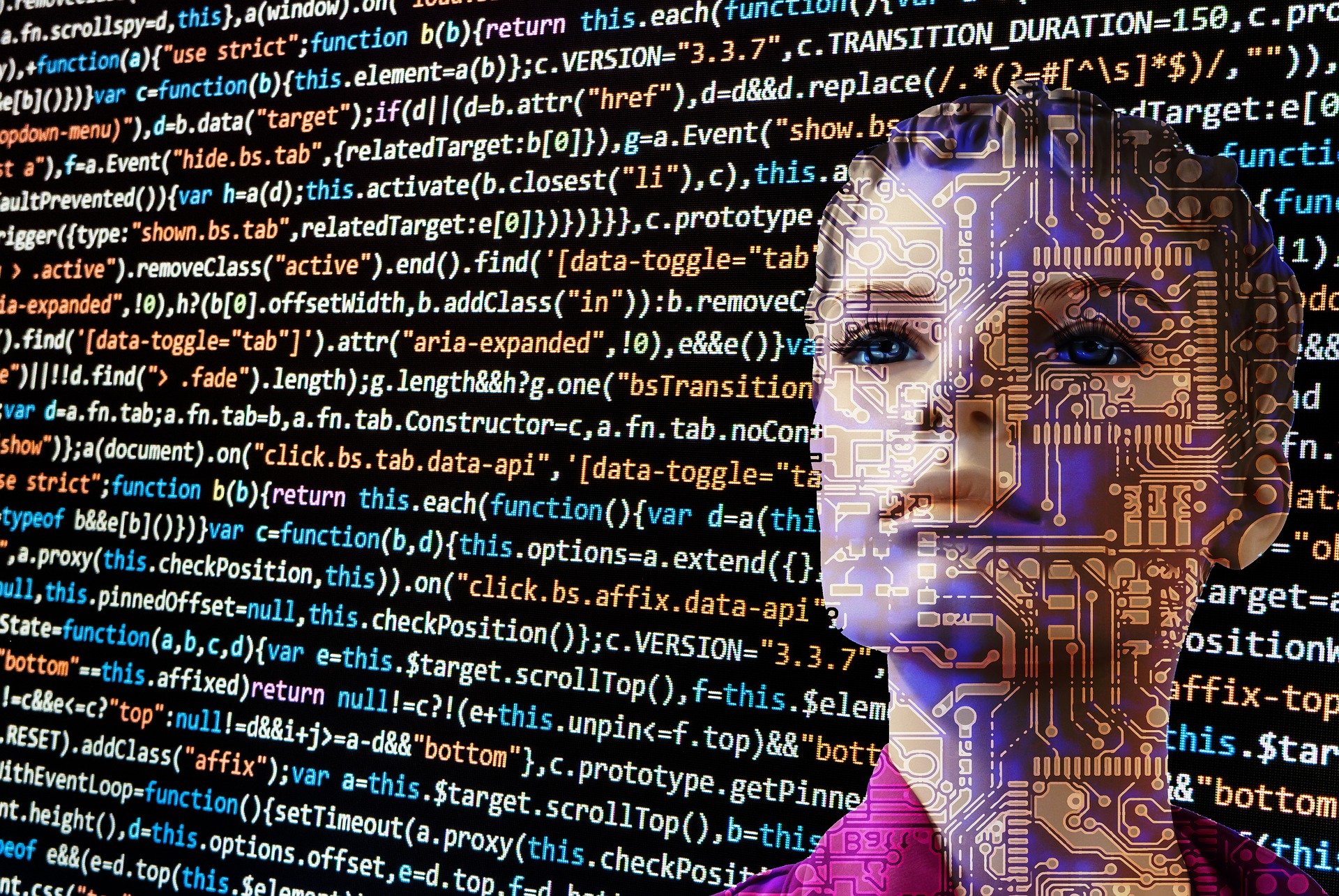 The false start into the 4th industrial revolution

The possibilities and automation potential of the technologies currently at our hand, including AI, IoT, and robotics are astounding. There are so astounding that some suspect the beginning of a new area and label it as the “Cyber-Physical Revolution” or “Fourth Industrial Revolution”.

It started in the 1990ies with the German government becoming increasingly concerned about the lack of innovation and competitiveness of its industry in the information age. The German industrial success story hails from the beginning of the Second Industrial Revolution more than 100 years ago.

Unfortunately, instead of just calling it “smart manufacturing” and although they just combined 2nd and 3rd industrial technologies, they called it “Industry 4.0”. The four was out. But not alone for long.

In 2015, in an article in Foreign Affairs, Klaus Schwab, the executive chairman of the World Economic Forum, popularized the term “4th industrial revolution”, labelled the 2016 World Economic Forums with it and published a book which was greeted with mixed reviews. Some hoped that it would [fade away into insignificance](fade away into insignificance) but it stuck. The term is simply too catchy and keeps appearing everywhere.

So the damage was done. The “4” was out for good. And it was generalised beyond manufacturing.

Understandably, you will label something that amazes you as “revolutionary”. It is also ok to write a book about it. As a futurist, I fully understand this.

But whether something is an Industrial Revolution is not determined by an individual writing a book in foresight but needs to be substantiated by facts and confirmed by historians in hindsight.

The argument here is not that the fourth industrial revolution will no happen. That is a given as 4 follows 3.

I argue that the 4th industrial revolution is no here yet as others have done including Jeremy Rifkin, Alex Usher, Ben Kritz, and Alper Utku.

Most importantly, I want to direct your attention to the dangers of thinking that the 4th industrial revolution is already there.

For this, I will start by dissecting the confirmed Industrial Revolutions.

What makes an industrial revolution

An industrial revolution starts with a revolutionary discovery which constitutes a new, cheap input. This input leads to the creation of new products which leads to the development of new processes.

The first Industrial Revolution was triggered by coal and iron, which led to the development of the steam engine, which mechanised manufacturing.

The second industrial revolution was driven by oil and electricity, which led to the development of cars, planes, and an avalanche of electrical machines, which enabled mass production.

The third industrial revolution was triggered by semi-conductors which led to the development of the transistor, computers, and solar panels which enabled digitalisation, highly automated workflows and renewal energy.

The following table summarises the properties of the three first industrial revolutions with a few more details.

The issues with the Fourth Industrial Revolution

The Fourth Industrial Revolution has a couple of structural and factual issues that may suggest that it is not yet happening.

If you look at the timing of the Industrial Revolutions, you will see that each of them are about 100 years apart.

The Fourth one would be happening already 40 years after the Third began in about 1970.

A pattern isn’t necessarily a rule. It could be that discoveries simply happen earlier in our fast-moving world. Let’s have a look at that.

There is no new cheap input

The proponents of the Fourth Industrial Revolution name, for example, Artificial Intelligence, Robotics, and the Internet of Things, as the revolutionary new technologies that enable it.

All those are not new cheap inputs, but IT outputs: AI digitalises cognition, IoT senses, robotics mobility. They all use silicon, 1s and 0s. They are children of the Integration Phase of the Third Industrial Revolution.

There is also no new energy source available that would suggest the beginning of a new industrial period.

The dominant new energy source at the moment is renewable energy. But there is nothing new there. Solar energy uses semi-conductors from the Third Industrial Revolution, wind energy uses electric generators from the Second, and water energy is pretty much technology from the First.

Other energy sources also fail to impress. Nuclear power dates from before the Third Industrial Revolution and fusion has yet to prove its revolutionary potential.

Occam’s razor says that “more things should not be used than are necessary”. The simplest solution is usually the right solution.

We don’t need a new Industrial Revolution to explain what is happening at the moment.

Worse, by overcomplicating what is currently going on, we confuse our understanding of what is truly happening.

For this, we need to look at the physiology of an Industrial Revolution.

The physiology of an Industrial Revolution

An Industrial Revolution needs time to get going. The discoveries need to be understood well enough and turned into reliable and broadly supported technologies before their economic and broader benefits can materialise.

In this first Innovation Phase of an Industrial Revolution, new technologies are established and matured.

In the Second Industrial Revolution it took about 30 years between 1890 and the 1920ies before the war of currents had a winner, enough power plants were built, homes were electrified, safety standards were established, and electricity became affordable.

In the Third Industrial Revolution chips needed to be optimised for power consumption, reliability, performance and interfaces normed. The transistor was invented in 1947, but it took until the early 1970ies for the first affordable pocket calculators to become available and to trigger an avalanche of cheap consumer electronics from Asia.

After the technical hurdles are out of the way, the focus shifts to solutions that explore what is possible with this wondrous new technology. The Integration Phase starts.

In the 1920ies, more than 80% of the US households were electrified, and the markets were flooded with electrical appliances: refrigerators, freezers, washing machines, dishwashers, vacuum cleaners. New companies and brands emerged. Most of what we still use today appeared in households around the world for the first time.

In the 2000er years, cloud computing emerged based on standardised IT components and architectures. It led to the establishment of global, powerful, scalable, and flexible IT platforms that offer endless capabilities and capacity that power the platform economy.

This sequence of invention and integration does not happen only once during an Industrial Revolution. It happens many times, in parallel, and repeatedly.

In 1991, this was described for the semiconductor industry by the Japanese scientist Tsugio Makimoto as Makimoto’s wave. It identifies 10-year long alternating phases of standardization (innovation) and customization (integration) that lead to the establishment and utilization of a new generation of microchips. 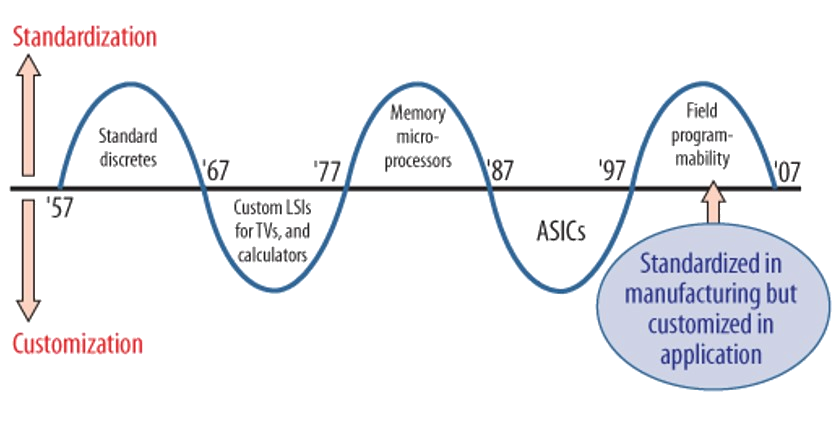 The experiences gained during the customisation phase will then trigger the development of even higher integrated microchips fuelled by the exponential growth of performance due to Moore’s law.

If we were now in the early phases of a new Industrial Revolution, we would be focussing on understanding and experimenting with the latest technologies. But we are not.

We are in the Integration Phase of the Third Industrial Revolution, where we need to apply the now proven technologies by building customised solutions.

Today, having access to technology is not a competitive factor any more. Everybody can buy all possibly thinkable IT capabilities at competitive prices and endless capacity from the cloud platform providers as Amazon, Google, and Microsoft.

They offer global platforms that are secure, scalable and flexible and integrate all technologies: servers, databases, networking, big data, speed recognition, AI, IoT, even robotics. You name it; they have it.

What matters now is what we do with IT. The limitation is only our imagination. New companies who are great at this can spring up quickly everywhere. This contributes to the dynamic VUCA conditions and fear of disruption that many currently experience.

If you understand this, you will not lose any time and jump right to applying technology, learn about it on the way and overtake your competitors who still think they have time to digitalise and get on top of technology.

You will start to experiment and apply AI, IoT, and robotics out of the box and unseat those who think that they still have time to play.

This is the power of knowing that you are in the Integration Phase of the Third Industrial Revolution. No Fourth needed.

Fake news is hard to come by